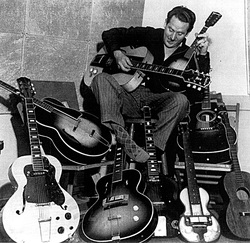 Les Paul(Lester William Polfuss) was not only a grammy award winner, but also a great inventor who was often called, "The Father Of Modern Music".  Les was credited as being a pioneer in the development of the solid-body guitar which would make 'the sound of rock & roll' possible.
Early on in his career, Les began to display his innovative talents as he created the first overdubbing, delaying effects, phasing techniques and multi-track recording.
In the early 1950s, Gibson Guitar Corporation designed a new guitar incorporating Les' suggestions. It would be a historical creation, as the Gibson Les Paul is still to this day considered to be the 'holy grail' of electric guitars(unless you're a Strat fan like myself!).

These picks were later replaced by the Gibson 'star' picks. 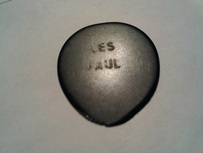 My very 1st Les Paul guitar pick. Printing is faded but the imprint is still apparent. 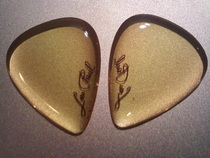