Let me start off by saying that V-Pick guitar picks claim that their picks are smooth as glass and cling to your fingers so that you never drop your pick again. I am pleased to say that these two claims are entirely correct. V-Pick picks were a pleasure for me to try out on my treasured vintage 80s Takamine. I wonder what my Stratocaster will think! Each pick is a unique work of art which is handmade and beveled to perfection.

It's what V-Pick, Inc. DOESN'T claim that immediately drew me in and made me a believer! These picks have superior tone and glide over your strings with a material that, to me, is reminiscent of genuine tortoise shell(I actually think it sounds BETTER than tortoise)! To say that V-Picks are made of acrylic just isn't a complete enough description-as these picks sound MUCH better than your run-of-the-mill acrylic guitar picks.  I've tried all materials, and these picks just 'feel' like tortoise shell, though their tone is far superior.

I don't know why it took me so long to try out these picks. They are not outrageously priced for the quality you will receive upon purchase, nor are they difficult to adapt to if you are 'stuck' with using strictly traditional 351-sized medium gauged guitar picks(some guitarists limit themselves, I feel, by allowing themselves to believe this is the ONLY size/gauge pick they are able to use). My review of these guitar picks will endeavor to describe the tone and 'character' of each sample I played with. But first, a little background history on the origin of these picks and its' company: 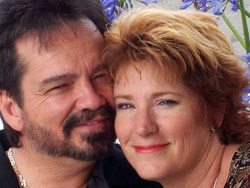 Vinnie Smith & wife, Nancy
There they are, Mr. and Mrs. Vinnie Smith, the founders of this wonderful company.  Located in Nashville, Tennessee, V-Picks Inc. continues to be a small family owned business.  Though the company wasn't started(nor were any of the Smith's picks sold) until 2006, the couple was making these little jewels as early as the 1980s.  I am displeased to say that NONE of my local music shops carry V-Picks. And when I visited one local shop today and requested they add V-Picks to their line of plectrums, the manager said, "V what?". Upon hearing his question, I produced my own V-Pick with a 'bullseye' grip and suggested he try it out.  Always a man of good taste, 'Alan' grabbed a Gibson 330 hollowbody from the wall, plugged it in, and proceeded to play his now-familiar jazz riff with ease. Suffice it to say, Alan was beyond thrilled and thoroughly impressed.  He asked where I got my pick and I gave him the website URL for V-Picks, inc. 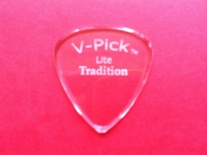 This is one of those little 'magical' picks that seems to create a unique tone depending on what 'corner' of the pick is used.
Back to the Smith's story.  Vinnie, a guitarist himself, was never pleased with one certain piece of his equipment--his guitar pick. He could emulate any artist, from Frampton to Brian May. But still....he felt as though every plectrum he had ever used, was missing that 'magical' quality he had been searching for all his life. As strange as it may sound to most people, Vinnie's love of salt water aquariums introduced him to his destiny. Acrylic. Mr. Smith immediately bought a sheet of this material and cut out some custom and standard shapes w/a hacksaw and began grinding them down. One humorous story on V-Picks website tells of how Vinnie first began buffing his creations on his Levi's jeans.
As some of us may know, a moment sometimes occurs in many guitarists' lives. The moment they lose their passion for their love-object(their guitar). I had heard of this growing up and never thought it would ever happen to me. Was I ever wrong. It was while going through nursing school that I just 'lost' my love. Gone were the days when I would not be able to walk passed my instruments without reaching out and touching them. Now, sadly, they were just objects--just a memory of a love gone wrong.  Though I did still play occasionally, it was not w/the fervor I previously experienced in my 15 years of bliss. Vinnie tells of a time this happened to him as well.  Mr. Smith just didn't find playing guitar 'fun' anymore. He called various studios and told them to stop calling him and quit playing for good.

For 5-6 years, Vinnie tried his hand(or, more aptly, his lips!) at both tenor and alto saxophones. Strange transition, huh? Regardless, Vinnie's fascination w/this instrument soon died as well, and he again began to purchase custom stratocasters & telecasters(he had sold ALL of his beloved guitars to buy his saxophones!).  Vinnie seems to be an enigma, as during this time he had completely forgotten his obsession for the tone of acrylic and of his acrylic creations a decade earlier.  So, acrylic absent from his mind--Vinnie again began his search, trying various shapes and materials available to all guitarists, much like we all have from time to time.

But it wouldn't be long before fate would soon slap Vinnie HARD across the face to remind him of his destiny and of his creations that countless guitarists would thank him for in the USA and abroad. While remodeling his home, he and his daughter found an old bag filled with effects boxes, pickups and the like. Nearly tossing the bag into the garbage, Vinnie decided to inspect the contents of this 'bag of tricks' more closely. His heart nearly ceased beating when he reached the bottom of the bag and pulled out the last remaining object--an old plastic plectrum that he had created back in the '80's!! Vinnie went back to shopping but was unable to locate the original-recipe acrylic that he had stumbled across in his younger years. Still, this too, was to be a mixed blessing, as his new recipe was better than the original recipe(KFC anyone?)!!
It was during a very trying time(read from the V-Picks website, as I feel my words will not do this story justice) that Vinnie found himself calling out to the Creator of all living things for guidance and comfort. And through his faith and passion for 'Him', God spoke to him through a phonecall from a close friend only two days after his prayer.  His friend guided him to an internet page called The Gear Page(EVERY guitarist's favorite forum!!) and suggested that Vinnie stop giving away all of his creations and urged him to consider selling them instead.
The Smith's immediately began selling their creations for $5.00 each or 3 picks for $10.00. Vinnie found himself doubting that they would sell at that price and in doubting this, he doubted the words his Creator spoke through his close friend. But, thankfully, Vinnie was wrong and the picks began to sell, as they say, 'like hotcakes'!!
...and the rest? Well....the rest....is history!!!
There are so many shapes, colors and sizes of V-Picks available to the public that they can't all be displayed here on these pages. These are just a few samplings of mine(sadly absent, their glow-in-the-dark model). V-Picks now makes personalized picks as well as electric guitar picks, acoustic picks, mandolin picks, bass picks and even DULCIMER picks! They also sell apparel, accessories, glass slides, gift cases w/picks, sampler pick kits, and a HUGE V-Picks desk sculpture/paperweight(I swear this item is screaming at me to buy it). I also suggest sampling Vinnie's 10-track cd, 'Sursum Corda'.

I urge all of you reading this review to visit V-Picks website immediately and frequently. For those whom I mentioned earlier(guitarists stuck in the 'medium gauge 351-shaped guitar pick' rut), I encourage you to expand on your skill and try more diverse and unique shapes and gauges. V-Picks has 3 such picks I will undoubtedly purchase very soon. These picks are The X-Pick, The Duet, and the unbuffed '1980' original recipe pick!! 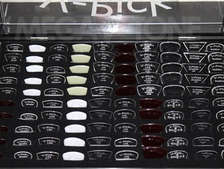 One thing pick collectors love is display cases, and you will NOT be disappointed in purchasing a CUSTOM-made personalized display tray of your own from V-Picks website(includes 30 V-Picks)
I hope each of you reading this have enjoyed the review and article. Some information was taken and/or re-phrased from V-Picks website with the permission of one of its' co-owners, Vinnie(thank you Mr. Smith for your story AND your generosity!!).  On a personal note, it was and IS an absolute pleasure to read your story and your unwavering faith in Our Lord. Keep up the good work and thank you from guitarists around the world, both novices & experienced!

For all of you romantics out there...I'm happy to say that thanks to V-Pick guitar picks, I'm beginning to develop a very healthy 'crush' on my Tak again and Led Zeppelin's 'Over The Hills And Far Away' never sounded so good!!

And finally, in conclusion...if you, a guitarist ever wondered what genuine tortoise shell picks sound/feel like but don't want to encourage the slaughter of the beautiful and endangered Hawksbill Turtle, I invite you to visit the V-Picks website linked to the picture below.  I think you will be pleasantly surprised... 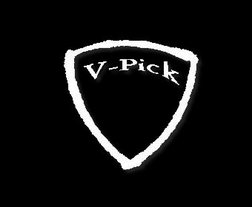